With an impressive series of viral music videos to their name, it is no surprise that the latest video from indie rockers OK Go is another hit. The video is directed by James Frost, in collaboration with Syyn Labs, a collective of engineers that work on elaborate art projects. A huge Rube Goldberg machine was built in a warehouse, for a one-take video for the song This Too Shall Pass.

Check out the music video, plus a series of "behind the scenes" videos in the gallery below.

"...Many tiny details needed to be just right for the machine's timing to work out.

For example, the wooden tracks used to guide metal balls at the beginning of the video had to be cleaned and waxed to keep dust from slowing down the balls and making them stick. And the angle of that board was set at a precise 3.4 degrees of incline, which was perfect for the timing but sometimes led the balls to jump the track.

Given that each of the machine's dozens of stages need comparably precise adjustments, it all adds up to a lot of labor by a lot of people.

Sadowsky estimates that 55 to 60 people worked on the project in all. That includes eight 'core builders' who did the bulk of the design and building, along with another 12 or so builders who helped part-time. In addition, Syyn Labs recruited 30 or more people to help reset the machine after each run.

The video was shot by a single Steadicam, but it took more than 60 takes, over the course of two days, to get it right. Many of those takes lasted about 30 seconds, Sadowsky said, getting no further than the spot in the video where the car tire rolls down a ramp..." (Read more). 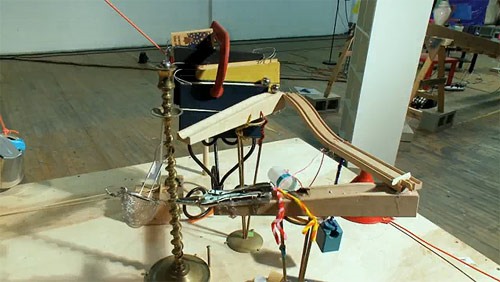 60 takes?! No wonder those guys looked so tired and frustrated.

I wondered to why they were covered in paint, now I know.
That video is sooooooo much work, I'm getting a headache just thinking about how insane it was.